In 2005 a new waterline was being installed at ESH behind the CHR building (old female wards). Workers with the project started digging up objects that looked like human bones and stopped to notify authorities. It turns out they had found the graves 0f 11 former patients buried sometime in the 1840s-1860s that were not marked on any known map. The University of Kentucky spent almost over a year to excavate the remains, study them and have a reburial at the cemetery the following year. Unfortunately they didn’t find anything that revealed anyone’s identity. In April of 2007 a brief ceremony was held at the cemetery when the patient’s remains were re-interred. Each “coffin” had a small marker put on it saying what age/sex/nationality they thought it was.  Our group wasn’t as involved as we would’ve liked, so hopefully this time around things will be better.

The first  photo is of the actual grave site were the former patients were buried again, the media wouldn’t come to the other side of the fence; 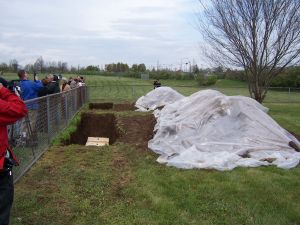 One of the plaques they put on the “coffins”. 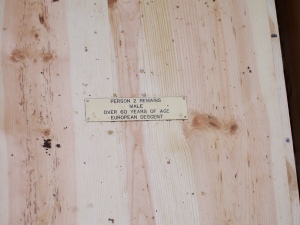 Here’s a photo of the plaque the state put over the graves, not what we would’ve chosen; 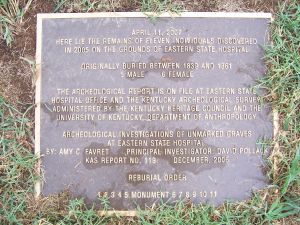